A few months ago we broke down the Pyramid Lake Fly Fishing season into three distinct periods, Early, Middle and Late. Here is a link to the Early Season description. Unfortunately we lost the majority of the middle portion of the season to the Lake’s closure as a result of historic flooding and crazy damage to the Highway and the town of Sutcliffe. The Nevada Department of Transportation, Granite Construction, the Pyramid Lake Paiute Tribe and the Red Cross worked hard to get things put back together as soon as possible. For that we are grateful.

While the Lake is still under limited access the season has been amazing since the reopening.

The Late Season at pyramid typically starts around President’s Day in mid-February this year (2017) it started March 1 with the season “re-opener”. This part of the season is typically marked by rising temperatures and spawning fish. This is the time of the year where having a 30, 40, 50 fish day is possible. And most of the time you can feel all of your fingers and toes with warmer weather and warming water. The LCT tend to be extremely active during this period as the water temperatures rise, elevating their metabolisms back into peak energy. Fish come in close to shore looking for areas to spawn, and in the case of Pyramid Lake, waiting for the spawning channel to be turned on below the town of Sutcliffe. When this happens most of the central beaches become aquariums as anglers on ladders can stare into the water and spot hundreds of fish running up and down the drop off. Technique is key this time of year and understanding spawning fish priorities will also help anglers transition from passive spectator to active participant.

As water temperatures rise so does activity. Not just trout activity, but all kinds of activity. Chironomids (midges) begin to make there assent through the water column as the water begins to warm. Chironomids live in sediment under the water for 10 to 14 months. After they mature their body begins to collect gas between their exoskeleton and their adult (emergent) body. This buildup of gas makes the insects buoyant helping them to the surface. Once at the surface the midges break free of their shucks and then as adults they mate and die. An individual insect may seem insignificant but they hatch seemingly all at once creating clouds of thousands of these bugs in and on the water.

Trout are not looking for big meals during the spawn. The fish are more concentrated on finding water ways to swim up and do their thing… That is why the north and south nets are so popular during this time as they are split by the constructed spawning channel. While waiting for their “turn” to go into the channel fish will focus on the clouds of chironomids. These trout have been observed swimming with their mouths wide open basically filter feeding like a whale. The most effective way to fish for these trout is when the water temps are from 52 to 58 degrees is with a floating line (with or without an indicator) and midges.

Ladders are a great tools at Pyramid Lake and have become emblematic because of their unique use. But they can be over used and often misused. Ladders are essential to getting an angler above rough water, or out of near freezing water temperatures during the deep cold of winter. But in the late period of the season storms begin to lessen in intensity and the surface temps rise to a manageable comfort level. Being on your ladder will increase your profile allowing fish to see you from farther away.

After spawning finishes the trout will look to eat big meals again as their metabolisms are in high gear and the after effects of the spawn will keep them ornery for a while. Switching back to a retrieving set up or balanced leeches will gradually take over as the most effective way to catch these fish. As the season progresses to its climax the fish will be heavily feeding on bait balls and tui-chub. This would be your opportunity to get a trophy fish on a gaudy articulated giant fly which is always a lot of fun in my opinion because the takes on these flies are strong and unmissable!

The season has come full circle as it winds to a close.

The very late portion of the late period of the season, mid to late June, fishes very similar to season opener. Eventually water temperatures will reach summertime highs and the trout will be forced into deeper water below the thermocline (a distinct separation between warm surface water and cooler water at depth). Fishing early in the morning and deep will be the only way to consistently catch fish. An occasional LCT will venture into the surface water, but only for short periods of time. 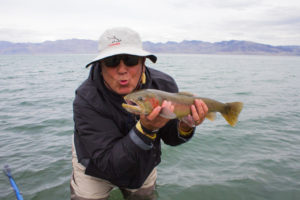 It’s amazing how quickly the end of the season is approaching. Don’t panic! They’re still months’ worth of fishing to come. Hopefully these blogs have helped to steer you in the right direction when it comes to fishing this great resource and fishery.

If you haven’t yet book a trip with me before the season ends. Call the Shop today to find a spot on the calendar

Mike Anderson is a guide and instructor at the Reno Fly Shop.  As a native Nevadan he has grown up fishing Pyramid Lake and the Truckee River. Mike spends many days each year at Pyramid Lake fishing, guiding, tying specialty flies and observing this amazing resource he is lucky to call his “backyard”. Call the Reno Fly Shop today to book at trip and experience this world class fishery.