Your Day to Fish Pyramid

A few days after the holiday craze was over I made it out for a quick stint of an afternoon trip at Pyramid.  Conditions were below freezing, clear, and of course windy. But, my brother was in town visiting from back home in Montana—so despite the weather we put rubber to the road and headed towards the lake.

After a quick stop at Crosby’s for a day license and some cheap beer we were on the water at Cattlegaurd at about 1 PM. Not too shabby. The best bite seems to be from 2-ish until dark recently anyway.

Out on the lake it was absolutely bitter. The temp. was in the low 30’s and the wind was howling in the 10-15 MPH range right in our faces. Brutal. But, the only thing certain about the weather at Pyramid is change and in my experience it’s usually worth just going regardless of what the weather man predicts.

I started off with a midge and pilot nymph rig at about 10 feet, my brother with a midge and a peacock balanced leech at 8.5 feet. Two hours later we didn’t have anything to show for our efforts except cold hands and battered egos. Not a single takedown, lost fish, or even fish sighting along the entire beech. Pretty tough fishing. So we decided to move north.

Further up the lake we landed at what would be best described as the northern most section of the North Nets. The swells were large enough here that they scooped up huge areas of sand on the beach and pulled them back into the lake creating big dark plumes in the water. Typically this makes the fish go on binge eating sprees, especially for midges. But not today. We even tried stripping buggers and boobies through the sand clouds. These fish flat out didn’t want anything to do with us.

It was about this time I realized I left my net back on the south end of the lake. Dumbass! So we hopped back in the truck and high tailed it back down there for the last hour of light.

This time we ended up on a big ledge point in the water close to Cattlegaurd. Surprisingly, right when we got there the wind completely died. Like a switch had turned it off out of nowhere. Weird. A lot warmer for us though, so we weren’t complaining.

First cast with the new flies my brother had a huge take and came unbuttoned within the first few seconds of the fight. Two casts later and fish on with the brown/red leech! Success! A nice 25 inch summit lake lohantan to the net and my brothers first out of Pyramid.

Before I could even switch to the brown leech and move my indicator down, he stuck another one. This time a slightly smaller pilot peak strain.  2 fish just like that. Nice. 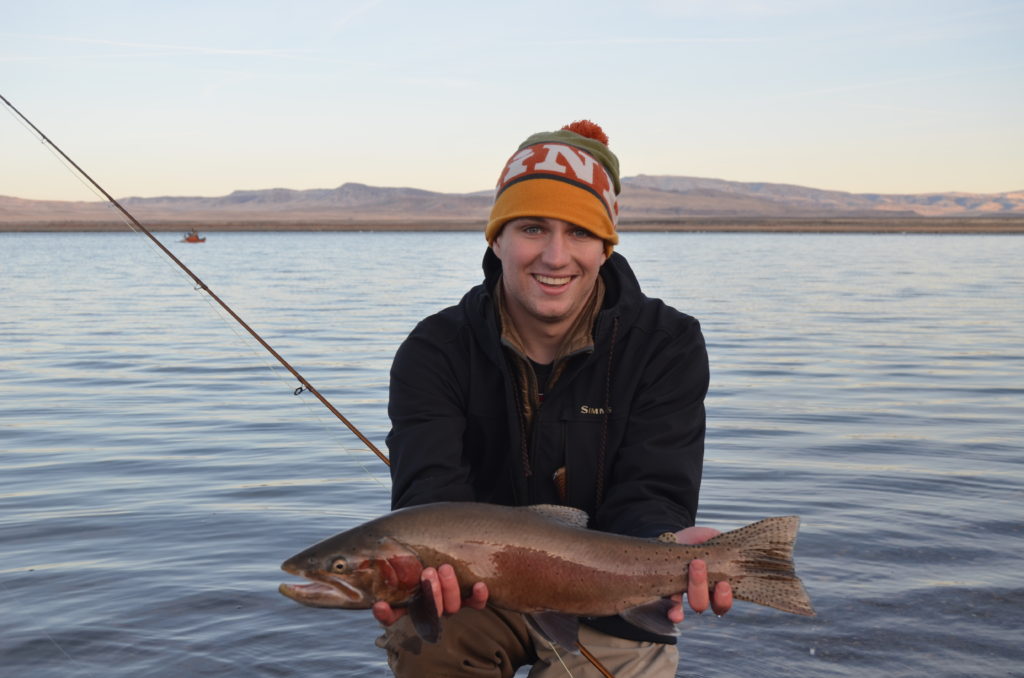 Once I had my flies in the water it was game on for me too. My first fish was the largest of the night—right in that 5-6 pound range. Not a monster, but still a great fish. I lost one that would have probably gone over 10 pounds a few casts later. Oh well. That’s just how it goes using barbless hooks.

For the rest hour we managed to scrap together nine fish in total; all on the brown/red balanced leech fished in tight to the drop off with lots of twitches/swimming in the calm water. 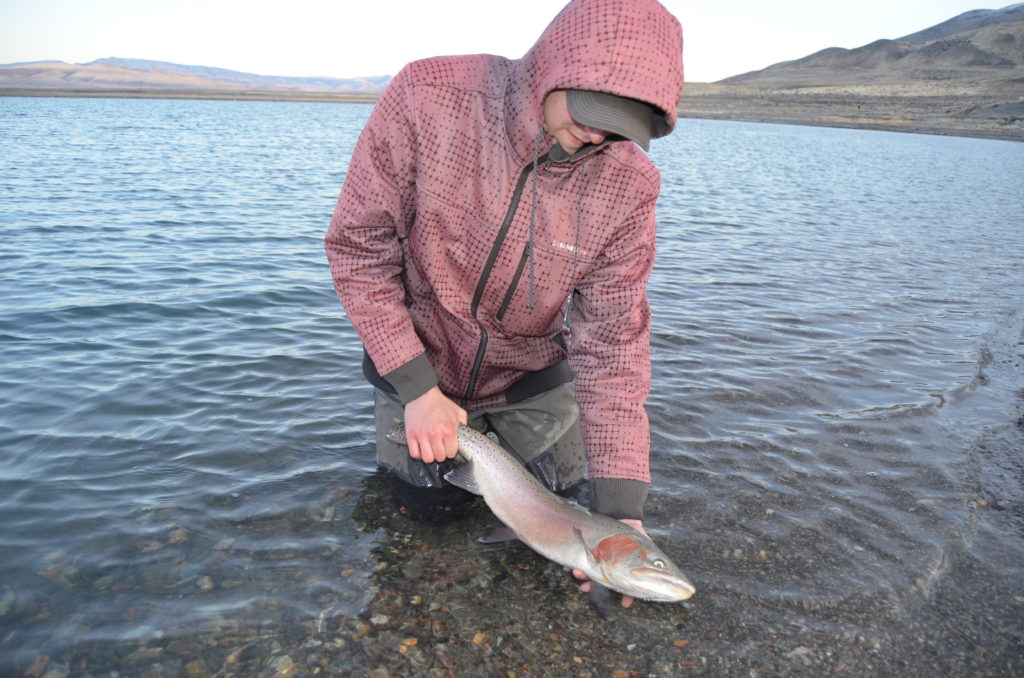 Overall, we were fortunate to turn a cold and slow day around at the last minute and put some fish in the net. It just goes to show that the demanding Pyramid Lake will give up its rewards if you continue to grind it out. If you continue to do the right thing all day long the fish are bound to show up. Cast well, keep your flies in the right spot, and stay confident in the harsh conditions.

Some days at the lake we do not catch as many fish as the next, but the fishing is always good. We are so fortunate to have a winter specific fishery here in the desert of Northern Nevada. Not to mention a lake where 20 lb. trout are right around the corner at any moment. Staying positive, keeping at it, changing beaches, depth, retrieves, flies, and techniques all pay off in the long run. It all adds to your overall understanding of the lake.

This might be your day to go fishing, take advantage of it. There’s something to be said for braving the weather and working hard for a few fish this time of year. 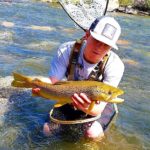 Matt Needs is a new staff member at the Reno Fly Shop.  He is also a student at the Univ. of Nevada studying Geological Engineering. When not in class or the shop Matt is fly fishing all of our local waters and the Steelhead Rivers of western Oregon.  In summer Matt is a fly fishing guide in Montana and will be found most days on the oars of his drift boat with clients throwing dry flies.