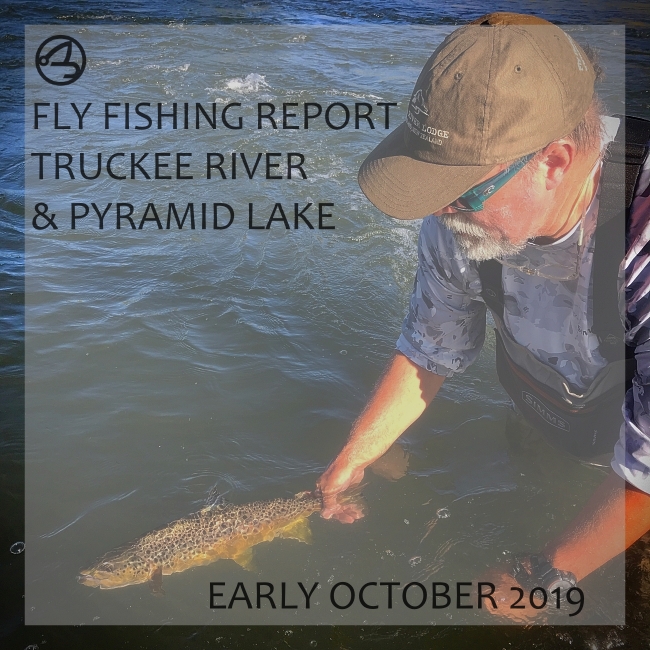 The Truckee River is fluctuating a bit from the storms earlier in the week, but is stabilizing around 375 cfs. Fall is definitely upon us. Storms are beginning to stack up and colder temperatures are moving in. On colder days fish have been becoming active later in the afternoon. Fly selection is getting simpler as most insects are tucking into rocks and preparing to hibernate. Smaller mayflies and caddisflies are the main food items for the trout. I’ve been fishing 16s and smaller. I’ll occasionally still put on a stone fly if I need need to get deep, but focusing on baetis and caddis patterns will produce more in the long run.

Water temps have dropped sub 50 degrees in the mornings. This has deterred some fish from eating in the mornings, but has not seemed to affect where they are in the river. Moderate to moderate-fast water is still holding fish. Focusing on structure and pockets has been key. Afternoon hatches have been prevalent in the afternoons right as the sun begins to get low in the sky. A mixture of pale evening duns and blue winged olives in size 20-16 have been the primary hatch with some caddis out east of Reno.

The opener has come and gone, and it was a busy one. Fishing was a little slow with only a few fish caught through the day. Water temps are already at 64 degrees (which is much cooler than past openers). Fish are looking to chase tui-chub, but with temperatures dropping quickly the bait fish are heading into deeper water. Retrieving Booby Flies, Pyramid Lake Beetle, and wooly buggers has been the most productive from a float tube or boat, however fish are being caught from shore with the lower temperatures.

Consistent with early season conditions at the Lake we suggest that you “stick-and-move”. Moving from spot to spot until you find fish will pay off. Try to find pronounced drop offs where you have access to many water depths and count down your sinking lines to determine the depth that fish are hovering at.