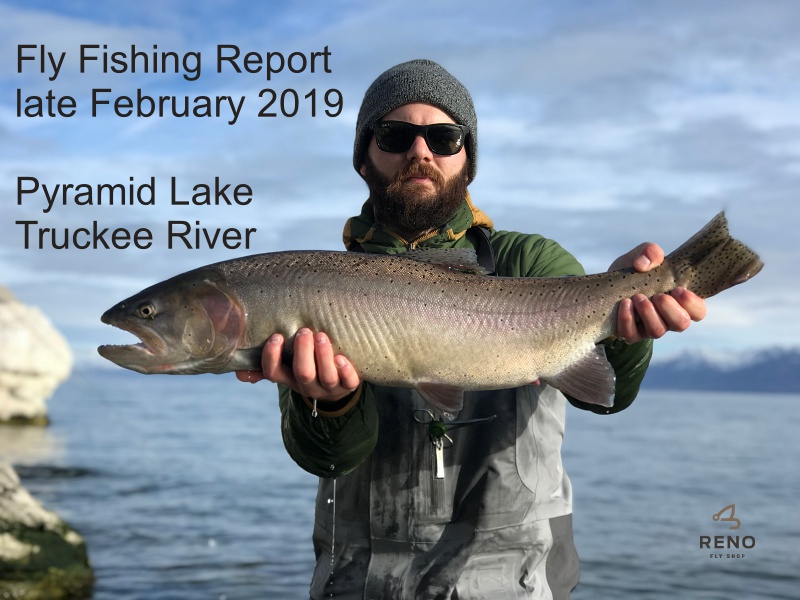 A lot has changed since our last fishing report. Cold storms and a lot of precipitation brought the Truckee River to just under 3,000 cfs, and 33 degrees Fahrenheit. A shock to the system, but one that the river needed and has already rebounded from. Flows at the downtown gage are 540 cfs and river temps are hitting 37 to 38 degrees at the Sparks gage again the same flow/temps they were pre-storm. Fishing has picked back up since the storm and high water. Using larger flies, worms, and streamers can be extremely effective when water levels change rapidly. Contrary to popular belief fish do feed in high water periods, specifically when the water first begins to drop and clear up.

Fish will move into softer water when water levels rise so expect the fish to be in different water than you were fishing before. Really focus on pockets and seams and slower water. It looks like we could be looking at a wet month of March as well so mastering some of these high water skills can be very effective.

Pyramid lake has been fishing incredibly well! Seems to be a trend this year. I’ve noticed a pattern in the last few weeks during these storms that the fish are really focused and feeding when weather patterns stabilize.

What I mean by this is, during the recent storms, wind direction changes every few minutes. During which it will begin to snow then stop, then sun will come out and then escape behind the clouds again. This much variability in the weather will put the fish down and they are less likely to come in to feed. The days where the weather is more stable the fishing has been better. As alway at the lake you want some wind and clouds, but the real difference marker has been consistency in weather conditions.

Midge hatches have been happening almost every day (Except for the very stormy days) and fish have been responding. I Still start the day with a midge and a leech pattern, but i am quick to change to a double midge set up if a few fish come on the midge early. If fishing slows i will put the balanced leech back on. Don’t get stuck fishing one way. If the fish are not, or stop biting change what you can until they eat again.

Retrieving flies has been slow. Shallower beaches on overcast days can produce some fish on the strip. The storms that I talked about in the Truckee River fishing report above have dropped the lake temp by a couple of degrees. This may account for the drop in productivity, or it may be just due to the time of year and increasingly large midge hatches.

Adams Built has updated their large Pyramid Lake net this season and it is a great addition to prep you for the large LCT out at the lake. Most of us practice catch and release and want to return the fish to the lake in the best shape that we can to be caught, hopefully again. This net has a coated nylon bag to not harm the fish’s slime layer. Extendable handle for long reaches, as well as, easy transport. Finally this years model has a graduated measure staff along the handle. You can pick up one of these nets today here in the Shop.