When I turned 16 I started competing in bass fishing tournaments. To get better I owned every book, vhs, and cassette on the pro’s strategies and techniques. I figured if you wanted to catch more fish more consistently why not look to the people who make a living doing it? They have evolved and perfected techniques out of necessity. Fourteen years later I use the same philosophy in fly fishing. Though competitive fly fishing is a smaller market with more rules that dictate technique the same principle applies. As competitive fly fishing has grown so has the tactics and techniques. Because of its effectiveness, efficiency and consistency most competitive anglers us variation of European Style Nymphing (ESN or Euro Nymphing).

In the past couple years the Truckee River has seen a significant increase in these techniques hitting the water. Euro nymphing has several advantages that lend themselves to the Truckee River.

As I’ve practiced this technique it has evolved to better suit my style of fishing the Truckee and targeting large trout. When I think ESN, I think Ivan Drago. Same ESN technique just on steroids. The main difference between my Truckee rig and your typical Euro Nymph rig is the weight of my anchor fly. My anchor fly will always be either a heavily weighted crayfish or sculpin pattern. The benefits of this abnormal amount of weight are

Flies:  Most euro nymphs have one thing in common. They are designed with a slim profile to cut through the water. Since ESN typically does not use split shot the weight must be tied into the fly itself. Therefore each fly is a blend of weight and slim design to cut through the water quickly. Normally one of the flies on the rig is more heavily weighted and is called the anchor fly. Admittedly I take this to the extreme. I use either a crawdad/stonefly pattern called a Stonedaddy or a jigged Slumpbuster. These extra heavy flies get down quick and provide a large meal for the alligator like brown trout lurking in the Truckee River. Generally your anchor fly is used more to get your other flies down into the strikezone, but in my experience more often than not, my strikes from bigger fish come on the anchor fly. I’ve come to view it as I am fishing for my trophy fish with my anchor fly and the smaller upper flies I have tied on are more to catch the occasional small fish to keep me interested. I will carry the Stonedaddy in several different sizes to match the depth and speed of water.

I was introduced to the Stonedaddy pattern by Doug Oullette, Reno resident/angler/guide. Though it may not look like your text book image of a crayfish due to its lack of the signature claws I think it is the perfect imitation. Again using my bass fishing background where crayfish are more popular I found evidence that supports the effectiveness of the stonedaddy pattern. Studies done by the Berkeley lure company one of the largest lure manufactures in the industry found that crayfish imitations without claws or legs triggered almost 3x as many strikes as an anatomically correct imitation.  It seems large claws can be a deterrent to fish since they can be seen as a large defense mechanism and are also harder to digest. However when most fly fisherman troll the fly bin they pick out the pattern with large claws.  The stonedaddy has small claw imitations which in my opinion and research adds to effectiveness. I used the stonedaddy as my anchor fly exclusively for my first year of ESN the Truckee. However through necessity my strategy evolved as I prepared for my annual trip to Montana.

I travel to Montana every year for 10 days with my dad and family friend.  I was particularly excited to apply my new ESN technique on the Madison where I knew the technique would thrive. However the Madison does not have crayfish in it. Therefore my trusty stonedaddy would not be as effective as it was on the Truckee. So I sat at my vice trying to decide what else I could tie. I am a huge streamer fisherman who can be found tossing big articulated streamers in Montana each October. So I was trying to find a way to blend my streamer fishing and big fish passion with the euro nymphing method I believed would be so effective on the Madison. I settled on using a Slumpbuster as my anchor fly and used a 90 degree jig hook to minimize snagging on the bottom.  The setup proved effective in Montana and allowed me to come back to the Truckee with a new approach. Now I could fish a streamer and a nymph at the same time. By adding a streamer to my rig I also was minimizing the need for a dead drift. Drag doesn’t impact the effectiveness of this rig as much since a sculpin actively swims, though not well. I have since made some adaptations to the fly to further blend the line between a sculpin and a crawdad imitations so it can be seen as both. I now use this pattern during the seasons when crayfish activity is minimal. My choice of color is based on whatever color the substrate is. For example, in weeds or algae covered rocks I choose olive, stone; natural squirrel, and in off colored water, brown.

These large anchor flies allow me to use any type of nymph as my second fly since they have more than enough weight to get them down. You don’t have to use specific tactical nymphs available in shops. Any modern or traditional nymph will be a great choice as you second (upper fly). This beefed up approach to euro nymphing also negates the need for thin line to get flies down deep. The added weight to the anchor fly allows me to use 3x, which comes in handy when you find that 26 incher on the business end of your rig. The large flies I’m using also get me down to a depth of water that most fisherman aren’t even close too. Longer casts and a quicker descent can get me down as far as 10 ft, whereas normal euro nymphing is built for the shallow to medium depth range. In some cases I am fishing for an entirely different fish than the angler next to me.

So when you’re shopping the fly bins at the Reno Fly Shop don’t shy away from those flies that are too small to be streamers but too big to be nymphs.  Reach for the kind of flies that when they hit your rod on the back cast your looking for your warranty card. In my experience you will start meeting fish on the Truckee you only saw in pictures. 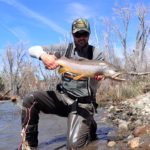 Andrew is a California native who has been fly fishing for over 15 years.  He takes a scientific approach to angling thanks to his Fisheries Biology degree from the University of Washington.  He specializes in euro nymphing and intentionally targets large trout throughout California and Nevada.